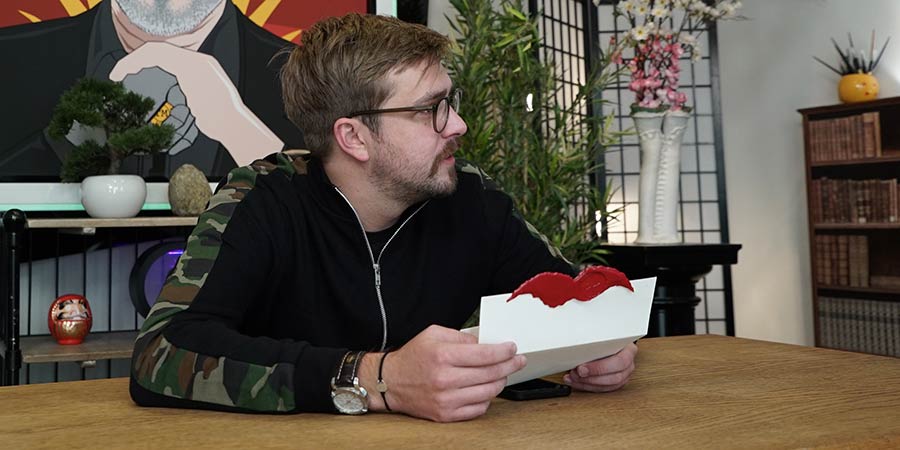 * Sian Gibson: Shirley Bassey's pop socks. - 5
* Iain Stirling: A song from Dick & Dom. - 4
* Paul Sinha: A housewarming gift from his parents: a picture from China of two pandas which appear to be having sex. - 4
* Lou Sanders: A pair of slippers shaped like breasts, with radios attached to them with rubber bands. - 3
* Joe Thomas: A pair of fake diamond earrings. - 1

Task 1: Put something on your face which looks like a moustache from a long distance away, but when you get up close you realise it is something completely different to what you thought. You have ten minutes to plan your moustache, and ten further minutes to make your moustache. Most unexpected moustache wins. Your time starts now.

Task 4: Travel the furthest distance while making a constant noise with your mouth. You must start travelling in 30 seconds from now. Furthest wins.

In this clip the contestants are set the team task of describing what's inside a box without speaking. This results in a very awkward meeting between Joe Thomas and Sian Gibson, and then some odd facial expressions from Joe.

Lou Sanders and Iain Stirling give it their best shot at fooling Taskmaster Greg Davies with something that looks like a moustache from far away. What do Lou and Iain decide to use? Does Greg guess it correctly?