Ricky Tomlinson looks at how sitcoms have mirrored the madness and merriment of the festive period, featuring Gavin & Stacey, The Vicar Of Dibley and Father Ted. 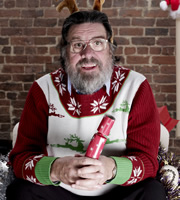 In the last in of the Sitcom Does... series, Ricky Tomlinson - no stranger to high-rating Christmas specials himself thanks his portrayal of Jim Royle in The Royle Family - takes us through some classic festive clips from the likes of Blackadder's Christmas Carol, Peep Show, Rising Damp, Terry & June, Bottom and Men Behaving Badly, and introduces star names like Hugh Dennis, Miranda Hart, Larry Lamb, Ralf Little and Arabella Weir discussing what it takes to make the perfect Christmas special.

But that's not all - Doreen Mantle (Mrs Warboys in One Foot In The Grave) revisits Victor Meldrew's house, Gavin & Stacey's Joanna Page goes back to Barry Island, we meet Emma Ware, who played baby Jessica in Some Mothers Do 'Ave 'Em's 1974 Christmas special, and Father Cleary and Father Billy from Father Ted go back to the very same lingerie store in Dublin to reminisce about the infamous eight-priests-in-a-lingerie-store scene in A Christmassy Ted.

Not to be outdone, actors Gary Waldhorn and James Fleet - David and Hugo Horton in The Vicar Of Dibley - have their own sprout-eating contest in the middle of Dibley.