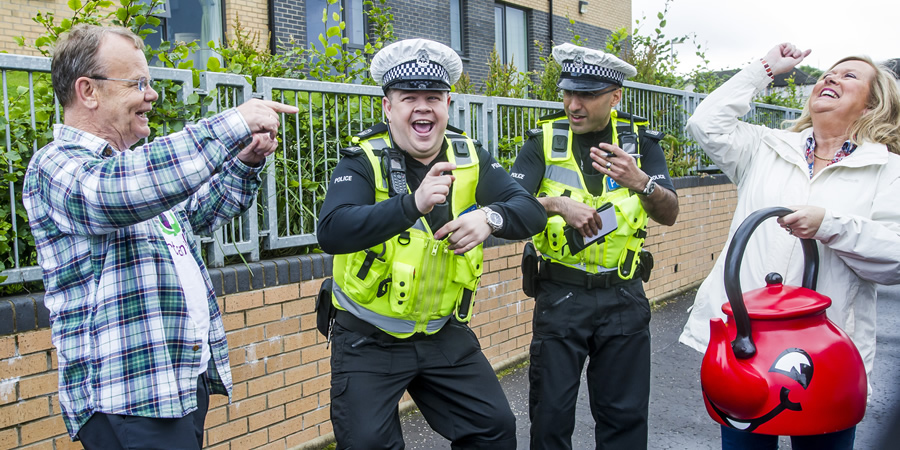 PC Jack McLaren battles a shoplifting bam and his own claustrophobia in a broken lift.
Preview clips

Magic happens at the traffic lights when road cops PC Surjit Singh and Hugh McKirdy pull over a couple of Scotland's most celebrated children's entertainers - this is something that'll test their mettle - it's Artie and Cilla from The Singing Kettle. PC McKirdy recalls joining them on-stage as a fresh-faced youngster. Soon the hard-bitten road patrol team swap police headwear for pirate hats for a star-struck singalong.

Plain clothes detectives PCs Megan Squire and Andrea McGill are organised to take down organised crime. However, even they're stumped when they come face-to-face with a baby faced suspect and his lawyer - quite literally as it turns out.

Dedication to duty can mean a dereliction of the heart so Officer Karen embarks on a little bit of online dating but is stunned when she comes across an unlikely but all-too-familiar potential love match.

Also this week the heroic cops show no fear whatsoever when PC Jack McLaren battles a shoplifting bam and his own claustrophobia in a broken lift as PC Sarah Fletcher offers calming advice. Meanwhile, PC Ken Beattie's blushes aren't spared when he discovers a hedgeful of pornography.

Archie Pepper pops up with an online dating profile that's capable of catching anyone and uses all his cyber cop skills to assist the Chief in a "hypothetical" situation.

DCs Squire and McGill come up against the notorious Big Kev.

PCs Singh and McKirdy are taken on a journey through time after pulling over some familiar faces...