Brand new comedy following the first Unified Scottish Police Force. Scotland has a new band of Bravehearts on the streets, in the countryside, on the phone and behind a desk. Featuring in-depth interview footage with the force's first ever chief constable, Cameron Miekelson, as he shares his philosophy on law enforcement and his hopes and dreams for the future.
Preview clips 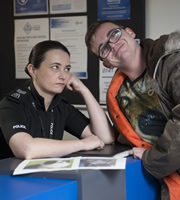 Elsewhere, Volunteer Officer Ken Beattie buys soup for the homeless and reassures an angry victim of washing line theft. Back at the station, Sgt Karen Ann Miller deals with the public including regular 'informant' Bobby Muir.

This episode was originally scheduled for broadcast at 10pm on Monday 5th November 2012, but pulled just a few hours beforehand due to a tragic news event.

A re-edited version of the pilot episode was broadcast in the preceding week to Series 1, on Monday 27th October 2014. The edits brought in better quality graphics and changed Miekelson's rank from Chief Constable to Chief Commissioner.

The case of the missing pants