Chief Commissioner Miekelson spends a day with Volunteer Officer Ken Beattie; PCs McKirdy and Singh get into a scrape thanks to a lost ice-scraper; and it's a case of green eyed monster for PC McLaren when PC Fletcher becomes the police poster girl. 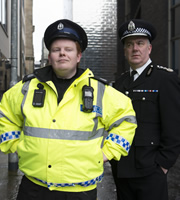 During his day pounding the streets with Volunteer Officer Beattie, Chief Commissioner Miekelson is unconvinced changing a homeless man's socks really is in the line of duty. "It's tedious work and whatever we're paying them it's not enough, and in Ken's case, it's nothing at all," he muses.

There's more to being in the Scot Squad than pulling on a high vis jacket for traffic enforcers PC Singh and McKirdy. They reveal the perks of policing including public respect and free kebabs. However, when an emergency call comes in, an iced windscreen forces PC McKirdy to make a munchy box improvisation.