This week, spoof comedy Scot Squad sees city cops PC McLaren and PC Fletcher involved in an undercover drugs bust; rural officers MacKay and McIntosh get a whiff of something dodgy on a local farm; and it's tough at the top as Chief Commissioner Miekelson chooses a new slogan. 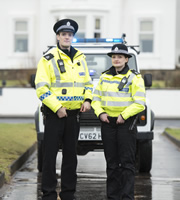 Hot on the trail of a major tip-off, city partners McLaren and Fletcher cross paths with Wild Turkey, who claims he's an undercover cop involved in a big drugs sting. Intrigued, the pair go along for the ride as Wild Turkey's 'haunners' but get more than they bargained for.

Chief Commissioner Cameron Miekelson is charged with the task of selecting a new slogan for the unified police force but is left underwhelmed by his team's suggestions.

Elsewhere, streetwise cops, PC McKirdy and PC Singh can't believe their eyes when they spot a cyclist on a bike, on top of a car roof; Sgt Karen Ann Millar showcases the new video messaging system; Volunteer Officer Ken Beattie embraces his new state of the art camera; while Bobby Muir reports an embarrassing mix-up between an Indian head massage and colonic irrigation.

Scot Squad - crime-fighters who prove there's more to Scotland than porridge, pro-golf and The Proclaimers.