The officers attend to noisy neighbours, an ice cream van man serving hard liquor and a raid on an arcade. 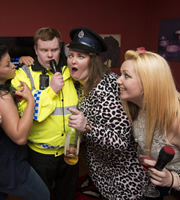 It isn't all sweet tablet, tattie scones and teacakes in Scotland especially not for the new unified police force.

This week, Volunteer Officer Ken Beattie finds himself in the middle of a domestic ding dong between warring neighbours; PC's McKirdy and Singh uncover ice-cream van dodgy dealings; and Chief Commissioner Miekelson gives his unique insight into how to tackle excessive drinking.

A karaoke commotion puts Volunteer Officer Ken Beattie in between two hot-headed neighbours. However, his peace suggestion sees him step up to the mic thanks to pushy partygoer Jamie-Leigh.

Traffic Cops PCs McKirdy and Singh's interest is spiked by a dodgy looking ice-cream van. When they discover it's trading in booze and not sweets they arrest the perpetrator but not before PC McKirdy pulls himself an ice-cream cone.

Excessive drinking is an issue for the police force and Chief Commissioner Miekelson offers his own insight. "Alcohol's fine - we're against bam juice," he says. "Keep the expensive stuff as it is, make the bam juice cost £100 a bottle. Problem solved."

PCs McIntosh and MacKay aren't amused when they have to investigate a smash and grab at an arcade. A trail of money takes them to the harbourside, leading to an adventure across the water.

Elsewhere, Bobby isn't happy when he's met by a new, unfamiliar face at the police station; an anti-capitalist protest takes an unexpected turn for PC Fletcher and PC McLaren; and call centre worker Maggie Le Beau explains why it's important to keep her cool.