When Spartacus the old family dog starts looking poorly, the Brown children reluctantly decide the time has come to put her in a home.
Preview clips 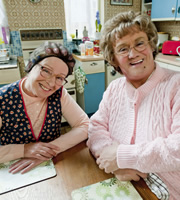 But when the Brown children decide how to break the sad news to their mother, Agnes gets the wrong end of the stick.

Under the impression that her children are planning on putting her in a nursing home, a furious Agnes sets out to persuade her children she's not going senile.

Meanwhile, Cathy's new boyfriend Professor Clowne is determined to interview Agnes for his new book about motherhood and won't take no for an answer. Agnes reluctantly agrees to the interview but then becomes convinced that Clowne actually wants to study her to prove that she's going senile.

Moreover, with Agnes's birthday fast-approaching, the Brown family have decided to throw their mother a surprise party. But poor Agnes is expecting a completely different surprise...

Mrs Brown and the Remote Control

Winnie gets her arm stuck down the sofa whilst trying to retrieve the remote control. Agnes comes to the rescue, but the two are caught in a compromising position by Cathy and Clowne...

Spartacus, the old family dog, is looking poorly. Reluctantly, the family decide the time has come to put her in a home. However, when the Brown children gather together to decide how to break the sad news to their mother, Agnes gets the wrong end of the stick.

Agnes is asked to compare her life with her mothers in an interview with psychologist Professor Clowne.