Agnes is feeling self-conscious about her weight after some less-than-flattering comments from her family. She decides to go on a diet but struggles to keep her resolve when she sees her favourite foods.
Preview clips 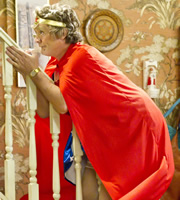 ﻿Rory meanwhile is in good spirits after securing a promotion as manager of the local hair salon. However he is immediately thrown in the deep end when he has to deal with a major staff incident. And as if that wasn't stressful enough, boyfriend Dino is in a foul mood with him after being overlooked for the job.

Does Dermot want Buster to be Robin or to go robbing?

Mrs Brown and the Big C

Winnie and Mrs Brown have a funny misunderstanding.