With Dermot and Maria's baby due very soon, Agnes is excited about the prospect of having a new Brown in the house.
Preview clips 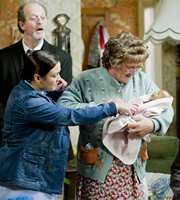 In the meantime Anges has to make do with the robot baby which the expectant couple have been given to practise with at their pre-natal classes.

Unfortunately, the new addition to the family keeps crying and disturbs everyone at night. Agnes kindly offers to babysit the robot baby and seems to have the magic touch, but her methods are not exactly orthodox...

Meanwhile, Cathy is feeling down about her love life. However, there's a new man on the horizon: her psychology lecturer Professor Clowne. Agnes is suspicious that a lecturer would want to hang around with one of his students and questions Clowne's intentions. But in fact the Professor seems more interested in studying Agnes for his new book than he does in spending time with Cathy.

Mrs Brown talks about having a baby.

Mrs Brown on Being Pregnant

Cathy is in a very bad mood...