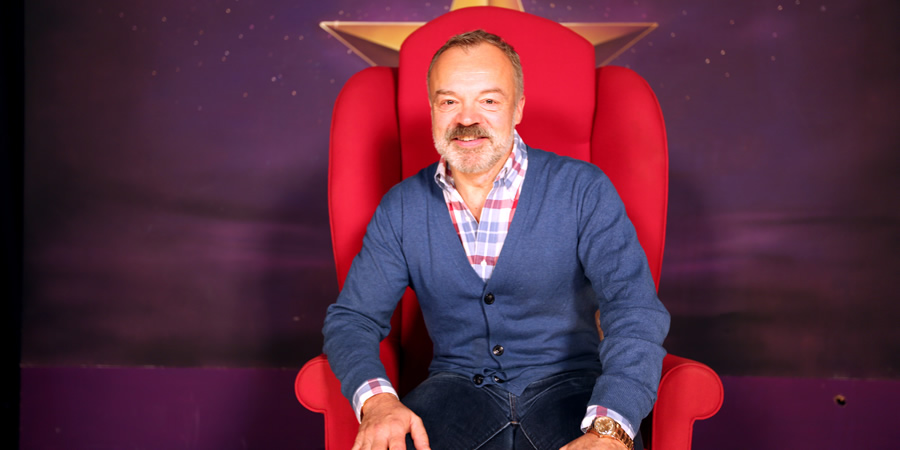 Graham Norton goes behind the scenes of TV's most famous comfy chair to meet the people who have entertained the nation with their stories. Sometimes.
Preview clip

Graham Norton goes behind the scenes of his award-winning chat show to tell the story of his famous Big Red Chair. He meets again some of the people who entertained the nation with their tales and shares the secret of how not to get flipped.

Conceived in 2009 as a tribute to one of Graham's favourite guests of all time, the late Ronnie Corbett and his famous seated monologues, the Big Red Chair became an instant hit with audience members who queued up to tell their funny, and not so funny, stories.

Celebrating the history of British television's most famous piece of furniture, the programme reveals how this extraordinary chair came to be a universally loved feature of The Graham Norton Show and relives classic anecdotes from the 500 stories broadcast so far.

Who can forget Aileen from Derry and her ill-fated leap into the wrong car wearing a scarf over her face screaming "go, go, go!" which understandably terrified the driver?

Aileen became an overnight Internet sensation and says of her Big Red Chair experience, "I never expected so many people to see it. People would stop their cars to get a photograph with me, I was messaged me from all over the world and I had a few marriage proposals! I never thought how much of an impact my story would have!"

Or Howie Moon from New York whose trip to the gynaecologist as interpreter for his Chinese mum resulted in him finding out that his elderly parents had a very active sex life. Considerably more active than his own...

Talking about the reaction to his revelations, Howie says, "When she found out I had told the story my mum thought I was crazy and said, 'Why didn't you tell the story about how we struggled to come to America?' My dad was pretty proud though and said, 'How do I find this on YouTube so I can show my friends!'"

And, Graham relives the sad story of Thomas from Durham whose failed final attempt to fix a date with audience member Jessica live in the studio resulted in the ultimate failure. He is now the number-one hit on YouTube as a man rejected on national television.

Graham also looks back at the Big Red Chair sitters who didn't make it to the end of their stories and some of those who didn't even reach the beginning. He also celebrates the Big Red Chair role with some the show's 'A' list celebrity guests, including Tom Hanks, Russell Crowe, Matt Damon, Madonna, Adele, and Tom Cruise.

Graham Norton goes behind the scenes of TV's most famous comfy chair.