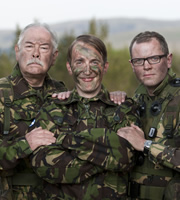 Gary 'saves the life' of Captain Fanshaw on a competitive skills exercise.

With the enemy being led by his father, Colonel Fanshaw along with his brother Rupert, the Captain is so grateful that, while the others are fending off the Colonel's increasingly audacious attacks, he offers Gary a new job that sounds too good to be true - and it turns out to be exactly that.

Under the piercing gaze of Sergeant Thomson, and with the rest of the team dropping like flies, it is up to Gary to somehow win the task - while trying hard not to impress the Captain any further.

Gary and his troops also pay homage to bands LMFAO and Kiss in their flashbacks from the front-line.

Sexy and I Know It

Gary and the boys take some time out from their hectic schedule...