Gary is desperate to return home from a boring posting in Germany, but things start looking up after Charlie announces his engagement. The bride-to-be makes quite an impression, but Gary's initial misgivings turn to excitement when he is asked to be best man.
Preview clips 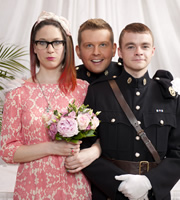 A posting to Germany hasn't quite lived up to the excitement levels of Afghanistan and Iraq and Gary is desperate to get home. However, when Charlie announces that he has just got engaged, the final week gets a lot more interesting.

Charlie's bride-to-be Anya makes quite an impression, and while Mickey thinks she seems fun, Jacko is less generous with his feedback.

Gary's initial misgivings are replaced with his excitement at being asked to be best man, and he starts making preparations for his special day. Gary meets Anya's family, including her cousin Jan, and organises an unforgettable stag do. The stage is set for Charlie's big day.

This episode was originally scheduled for Monday 22nd October 2012, but the broadcast was cancelled due to a hastily scheduled Panorama special.

Imagine if monkeys could talk

Gary on being pals with primates.

Gary shows off his Gary Barlow side.