Patrolling the outer perimeter at a climate conference is looking like being one of the most boring jobs the soldiers have ever had... 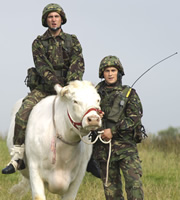 Patrolling the perimeter at a climate conference is one of the most boring jobs the soldiers have ever had... until Gary catches sight of a family of protesters dressed up as rabbits.

Rounding them up is only half the battle, as Sergeant Thomson insists they are delivered to the police who are waiting at a far away checkpoint. As they travel with their prisoners, the family try to get through to Gary with their message of peace, but it is their costumes that have the most emotional effect on him.