The boys decide to play a trick and pretend the tank has been stolen. However the joke's on them when the tank actually does go missing.
Preview clip 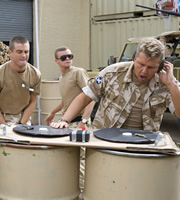 Gary and friends are back from Afghanistan and returning a tank to the barracks. The long drive has made Gary, Jacko and Adam hungry, and despite protests from Charlie, the boys pull over to a service station to get their full Scottish breakfast and a large plate of chips. Noting Charlie's anxiety, they decide to play a trick on him and pretend the tank has been stolen. However the joke's on them when the tank actually does go missing.

Gary has to call in help all sorts of favours, including Jacko's hapless sister Julie, before Sergeant Thomson finds out.

The programme also sees Gary providing his opinion on the Queen, regrets, what he would write about in a book and the meaning of the word 'radical'. There is also an online song tribute from the boys to Lady Gaga.

Gary and the boys remake Lady Gaga's Telephone in the heat and dust of Afghanistan.