Sergeant Thomson punishes Gary and the boys by putting them on kitchen duty for the Captain's important dinner. 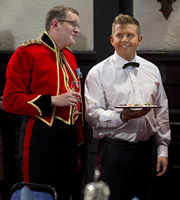 Following a prank that goes wrong, Sergeant Thomson takes a brief break from his day off to punish Gary and the boys by putting them on kitchen duty for the Captain's important dinner.

Chef works hard to keep them under control while also trying to create a dinner good enough to impress Colonel Fanshaw, the Captain's father. But when an inebriated Thomson returns to wreak havoc in the kitchen, it is left to Gary to ensure that the dinner is a success and the Captain isn't embarrassed.

Gary also gives his own unique thoughts on the people he admires the most in the world, the BP disaster, David Cameron's big society and politics - plus the boys give an online song tribute to the Pussycat Dolls.