With the threat of looming barracks closures, an irritated Sergeant Thomson prepares everyone for an MP's visit. But frantic preparations see Thomson injured, so Gary steps up to show the MP around.
Preview clips 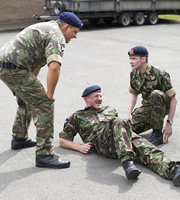 Gary and his comrades are under threat of their barracks closing and Sergeant Thomson is more irritable than usual as he prepares everyone for the visit of MP Steven Maxwell.

The frantic preparations see Thomson injured so Gary steps up to show the MP around. Under strict instructions from Thomson to stick rigidly to the 'boring' agenda, Gary has a better idea and he and Mickey defy the Sergeant to appeal to the MP's appetite for action, but they underestimate just how insatiable it is.

Gary and the team also pay homage to Rizzle Kicks from the frontline.

Down With the Trumpets

Gary and the lads take some time out to show off some moves.

Gary seeks the answer to an urgent query.