The army are looking for soldiers to be part of their new advertising campaign... 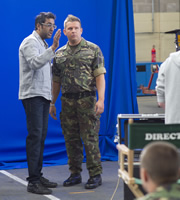 Sensing a shot at fame and stardom, Gary would rather do the army advertising himself but as they are looking for teams he signs Adam, Jacko and Charlie up for the audition as well.

Jacko and Adam take dramatic tension a bit literally as they come to blows during their rehearsals, so Gary has to act as peacemaker if he is to stand any chance of landing the audition and becoming the new face of the army.