When Cammy, an old adversary of Gary's, is posted to the barracks, old rivalries soon erupt into a brawl. As vengeful actions escalate, Gary finds himself in serious danger of being kicked out of the army forever.
Preview clip 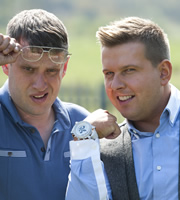 Cammy, an old adversary of Gary, is posted to the barracks and old rivalries are soon restored after Cammy tricks Gary into buying a cheap watch. The result is a brawl and Sergeant Thomson punishes them both.

When a series of tit for tat exchanges follow, things quickly get out of hand and army property is defaced with Gary the number one suspect.

With the boys unable to provide an alibi and Thomson refusing to believe that Cammy was behind it, Gary finds himself in serious danger of being kicked out of the army forever.

Gary and his troops also pay tribute to Cher Lloyd in their flashbacks to the frontline.

Gary recalls a childhood tale with a message - 'The Boy Who Could Cry Like a Wolf'.