Jimmy Carr is joined by Miranda Hart, Eddie Izzard, Jamie Oliver, Jonathan Ross, David Walliams and David Mitchell to look back over the events of 2011. 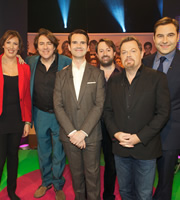 Christmas is a time for traditions: Carol singing; decorating the tree; turkey and all the trimmings; drinking to near unconsciousness; and falling out irrevocably with family members. In recent years, another tradition has been added to the festive roster - Channel 4's Big Fat Quiz Of The Year.

At the end of her multi-award winning year, Jimmy Carr is joined by Miranda Hart who'll take a seat on the panel for the very first time. Also being inducted into the Big Fat Quiz Hall of Fame is legendary comedian Eddie Izzard. To round off a trio of quiz virgins, Jamie Oliver will be swapping saucepans for sarcasm. They will be alongside Big Fat Quiz Of The Year veterans Jonathan Ross, David Walliams and David Mitchell.

Can you remember which celebrity was 'Winning' this year? Which sportsman had his secrets spilled in the House of Commons? And how on earth did select committee hearings become the must-watch TV of the summer? 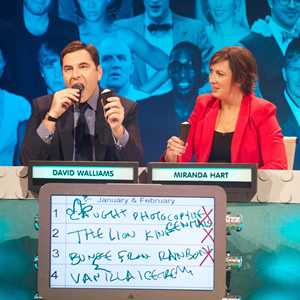 Jamie Oliver almost vomits when Jimmy Carr present the panel with breast milk ice cream to try. Jamie balks at the idea of tasting the specialist ice cream but David Walliams (pictured) tucks in to two cones declaring "I've never had breast milk! I wasn't given breast milk as a child and I've always wanted to have it. This is why I did the Bitty sketches!"

Jamie said: "Honestly I will gag I can't handle this. Its £14 a scoop, it's disgusting. I don't like the idea of it. I've had four kids. I'm a bit sensitive, I had a medical the other day. I will throw up."

Jimmy doesn't let him off easily saying "If we booked Heston Blumenthal he would have it, come on."

The panellists were given the ice cream after answering a question about what advert was banned this year.

Miranda Hart refuses to taste it because she wants to make a stand: "The answer was that it's made of breast milk. My point is that you might go urgh that's disgusting but if you really think about it vanilla ice cream is made from a cows udder and that's disgusting."

David Walliams declares to the audience it's "absolutely delicious... it's very nutritious!"