Alan is joined on the sofa by Ant and Dec, John Barrowman and Supernanny Jo Frost. 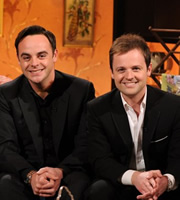 Alan is joined on the sofa by Ant and Dec, who tell him about their new game show Push the Button. Also Torchwood actor and musical star John Barrowman chats about his new album and Supernanny Jo Frost discusses her brand new Channel 4 series.