In this final episode of the current series, Alan will be joined on the sofa by Boy George, Sex and the City star Kim Cattrall, and hip-hop group N-Dubz. 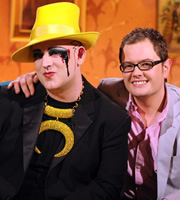 In this final episode of the current series, Alan will be joined on the sofa by 80s pop icon Boy George who discusses his new single Amazing Grace and UK tour. Star of Sex and the City Kim Cattrall tells Alan all about her new film The Ghost; plus award-winning hip-hop group N-Dubz pop in to chat and perform their latest single, Say it's Over.