Alan is joined on the sofa by guests including the newly-crowned WBA World Heavyweight Boxing Champion David Haye and US teen sensation Justin Bieber chats about his new single Baby. 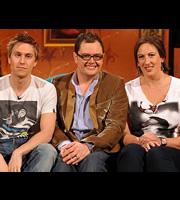 As well as giving Alan a few boxing tips, David Haye will be chatting about his forthcoming bout against John Ruiz in the World Heavyweight Championships where he hopes to retain his current title.

And Florence + the Machine performs Dog Days Are Over.