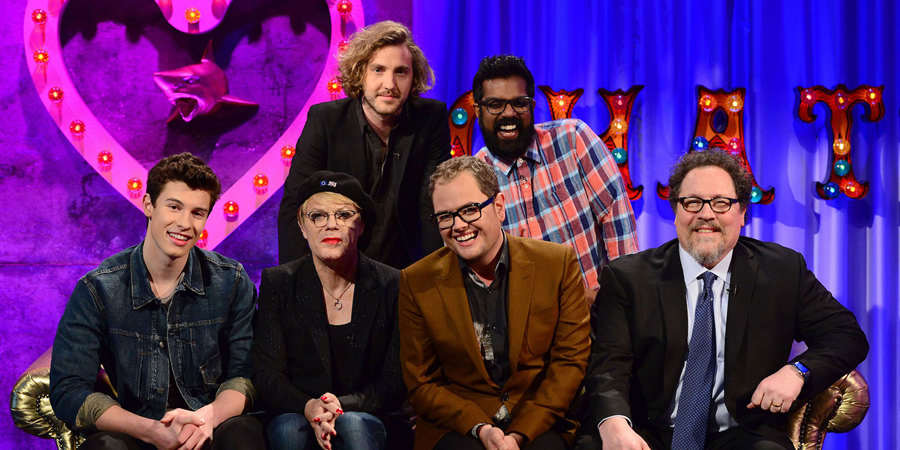 Alan is joined by the incredible Eddie Izzard who talks about his amazing marathon endurance challenge for Sport Relief. Also on the show is US actor and movie director Jon Favreau, who discusses his latest film The Jungle Book. Comedians Seann Walsh and Romesh Ranganathan talk about the upcoming second series of ITV's Play To The Whistle. And music comes from Shawn Mendes, who performs his single Stitches live in the studio.
Preview clips

Eddie: Well, I am running for a member of parliament in 2020, and I have said that for six years so everyone knows that and is very bored by it.

Eddie: Well I am going out there. The whole thing is that we want as much transparency as possible in politics and we want people to be real people in politics - that's what people want - but you also have to be a team player. It is a real tricky thing in politics to be a complete individual and to play on a team. I think Boris Johnson has done this thing of not playing on the team because he is now saying he would like to run away from Europe and I say no, stand and fight in Europe. I am for standing and fighting. I'm just back from performing in Paris last night in French, I'm performing in German. I am doing very positive open-handed politics, but anyway, generally people do want more transparency, as much transparency as is possible in politics.

Alan: You know when you say 'real', because nowadays if a politician knows who is in Coronation Street that is 'realness' but I would rather a politician be doing something instead of sitting in their pants watching Homes Under The Hammer. It's a two-way sword. You want them to be normal but you have to get the balance right.

Eddie: It is really tricky, and I'm a very boring person which I think really helps me.

Alan: Shut up, you are not boring. You are wearing a beret! Boring people do not wear berets!

Eddie: I just throw a beret on to make myself look windswept and interesting, as Billy Connolly would say. As performers, people who go in to the entertainment industry, we go and have a cup of tea and buy a newspaper - it's not that exciting. You get to performing and it gets a lot more exciting, but our real lives still stay kind of normal.

Alan: You know when you start getting involved in politics; it is going to open a can of worms. You are going to be scrutinised and you will have people going through the bins. Are you worried about that?

Eddie: I don't know. If they find out I'm transgender, I don't know what I will do. Do you think they have worked it out? Well that was my skeleton in the closet. Get your skeletons out and give them a good airing and tell everyone about them. 31 years ago I came out. How long ago did you come out?

Alan: I'm not out! Shh! My wife is watching! I have always been camp. I was getting people shouting 'bender' when I was 8 or 9. I was never really in.

Eddie: I came out with 'transvestite', because they would say, "Are you straight? How could you be straight? Surely you are gay?" I don't know. I didn't arrange these genetics. Talk to god. Get him down here, but he doesn't turn up, not for WW2 or anything. I knew when I was 4 and I came out in 1985, which is so long ago. I said to my dad I think the British people will be ok with this as long as I'm relaxed about it. People go "OK, it's boring". We are almost at boring with sexuality, and it is what you do with your life. What do you add? I run marathons, I do comedy, I do drama, and going to politics, and that is what people want to know. Sexuality? Boring!

Eddie Izzard talks about his marathons

Alan Carr does his best to interview Eddie Izzard about his latest marathon, whilst powering the studio on a treadmill.