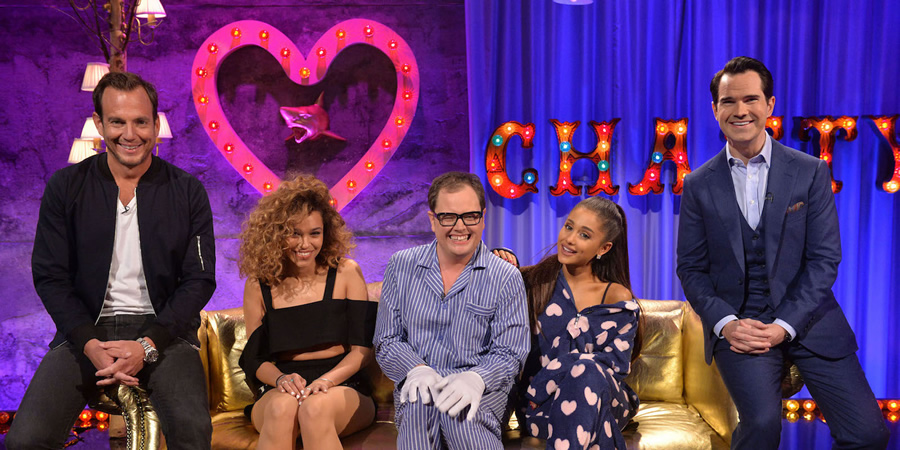 Alan is joined by comedian Jimmy Carr who speaks about his upcoming original Netflix comedy Funny Business; Ariana Grande chats about her new album and single, Dangerous Woman; and Will Arnett talks about his series Flaked. Music is from Izzy Bizu, performing her latest single Give Me Love live in the studio.
Preview clip

"I had one earlier this year when I was in Australia. One of the stage lights fell down and just missed me. I was fine, these things happen. Didn't hit me. I was totally cool and continued on with the bit of material. It wasn't until the interval when I got off the stage and my tour manager went, "Are you alright?"... I said I was fine. It was just a light, no big deal. "No, no. Someone threw a bottle at your head". I must have blinked when it went past. Apparently it was about two inches from my head and it just landed behind me.

Jimmy Carr on his Netflix special...

"It was the easiest thing in the world because I basically said to Netflix; do you want us to do a thing for you? The said yeah, and that was it. You go and make it and get back to them when its finished. There are no notes. There is no censorship on it. When you are on telly you are sort of a guest in someone's house, and like a show, people have bought in to it and they are in the room. When you say something on telly, I do feel like there is a bit of responsibility as to what you say. On Netflix? Nothing. You can say what you want, so I did. It's incredibly rude, even for me."

Jimmy Carr on his laugh...

"I hate it. We [Alan and Jimmy] both started around comedy at the same time and I loved, and still love going to comedy. I go all the time and my laugh really pulls focus. I laugh on an 'in' not an 'out'. It's a weird honking goose of a laugh. I went to see my friend Nick Helm live in concert in Edinburgh about three years ago, and I was sitting at the back minding my own business, trying to stifle my laugh. I can suppress it a bit if I know. It sounds like someone smuggled in an owl. About 20 minutes in, I was really enjoying the show, sitting in the back quietly. Then he did a routine that I found hilarious and I had a proper full on laughing fit. [Does his laugh] It sounded ridiculous. Nick just stopped the show and went, 'Alright Jimmy, I don't laugh when I come to see one of your shows'. Devastating."

Jimmy Carr and Alan Carr attempt to censor themselves whilst playing Dirty Countdown.