Alex Garrick-Wright is an improv performer and comedy writer. Winner of the Making A Scene Of It sitcom script competition along with his writing partner, Rebecca Bain.

Alex Garrick-Wright and his writing partner Rebecca Bain have been lead writers on BBC Scotland's Breaking the News, and had their work broadcast on BBC Radio 4 Extra's Newsjack, The Treason Show, News Revue and Sketch Please! In March 2021 they won the Making A Scene Of It competition for their sitcom script, Coconut Republic. Alex is based in Shetland and Rebecca is based in Edinburgh, so they were sick of writing via Zoom before it was fashionable.

As well as writing, Alex and Rebecca perform and produce their own sketches under the name Bonnie & Clydeside. Alex is also a founding member of Shetland Comedy, which organises, produces and promotes comedy in the Scottish isles, and is a member of the Imposters improv troupe.

"Alex Garrick-Wright's comedic timing is thoroughly impressive which could fool one into believing there was a script all along. He also brings a wonderful sense of structure to the comedic madness crafted by skilled character performances by Marjolein Robertson."The Shetland Times (Jessie Syme), 20th March 2020

"Jones and Garrick-Wright sitting down as two humdrum men looking at holiday slides - which were acted out freeze-frame by the other three - was perhaps the night's highlight."Shetland News (Chris Cope), 14th July 2018

"Garrick-Wright, meanwhile, was impressive as the villain, using dramatic force to play up to the role with comic exuberance."Shetland News (Chris Cope), 20th January 2018 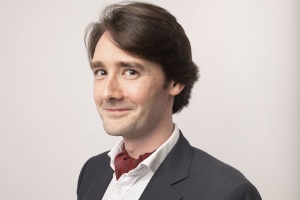 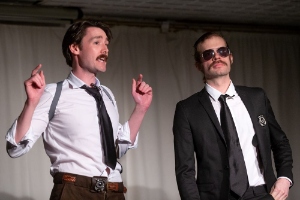