The decision to hold equestrian events in Greenwich Park is one of the most controversial choices made by the Olympic authorities, as the Deliverance team discovers.
Preview clips 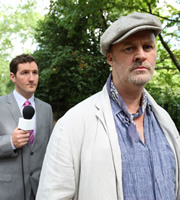 Among the many groups of people who are against holding equestrian events in Greenwich Park are local residents, led by self-styled maverick film director Tony Ward. Given that it's now over 30 years since he made his one - and so far only - successful film, Ward has had a lot of time on his hands to think about how angry he is and to plan his campaign of protest.

It starts with the arrival of an enormous pile of horse manure on the pavement outside the Olympic Deliverance Commission offices and climaxes with a live head-to-head debate with Head of Deliverance Ian Fletcher on BBC Radio 4's Today programme.

Meanwhile, in Ian's personal life, manure of a different kind finally hits the fan and he finds himself effectively locked out of his own house by his wife. Fortunately, his ever-loyal PA Sally is on hand and completely ready to pick up the pieces.

A Pile of Manure

The manure is quite literally hitting the fan in more ways than one for Head of Deliverance, Ian Fletcher.

Save the Stag Beetle

Can Kay Hope prevent the Greenwich Park stag beetles winding up in the waste paper bin when the Olympic equestrian events come to London in 2012.