As the team wrestle with demands for increased security levels, Ian Fletcher chairs the final ever meeting of the Security Committee's Special Catastrophisation Unit.
Preview clips 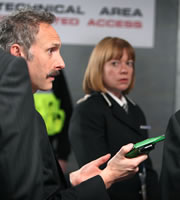 32 days to go until the Olympic Games. As the team wrestle with demands for increased security levels, Head of Deliverance Ian Fletcher chairs the final ever meeting of the Security Committee's Special Catastrophisation Unit - where it emerges that someone has been caught converting official Olympic starting pistols to fire live rounds.

With the US Security Forward Team about to arrive to review security arrangements for the Games, the challenge is to find a way of handling this piece of news in a way that doesn't involve shooting themselves in the foot.

Meanwhile Kay Hope continues her one woman quest to find a sustainable use for the stadium post-Games, and Siobhan Sharpe and her team at Perfect Curve take on the task of re-branding the Games' Travel Advice Pack in such a way that no-one will ever have to read it.

Graham goes through security at the Olympic Park and has to remove his shoes. The visiting Americans are not impressed.

The Future of the Olympic Stadium

Ian tries to get the team to focus on the problem of the future of the Olympic Stadium post-Games, but no one will take responsibility for the issue.

The team at Perfect Curve come up with a way to inspire confidence in travel during the Games by getting a cool title for the Travel Advice Pack.