There are 10 days left to tie up loose ends before the Deliverance team finally hands over to the Live team...
Preview clips 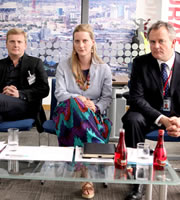 There are 10 days left to tie up loose ends before the Deliverance team finally hands over to the Live team. But there are some outstanding issues - including news that the fireworks planned for the Opening Ceremony will trigger all the ground to air missiles that are in place for the Games' security.

The team also need to come up with a response when it transpires that the charging stations for the official Olympic electric cars work so slowly that the entire fleet will quickly become plugged in and stationary.

Or how to enliven a competition to compose a special peal of church bells to ring in the dawn of the Opening Day which has so far attracted only two entries.

On a personal note, newly divorced Ian has some loose ends of his own, including what to do with the rest of his life and what to do about Sally...

Sally talks Ian through different Italian holiday options that he may want to book after his role as Head of Deliverance comes to an end.

Kay Hope has overseen the installation of slow charge charging points to keep the Olympic fleet of electric cars going throughout the games.