A visiting group of dignitaries from Rio is in London for the week. All the team have to do is to meet the Brazilian delegation and take them by coach to the Olympic Stadium to meet Lord Sebastian Coe. What could possibly go wrong?
Preview clip 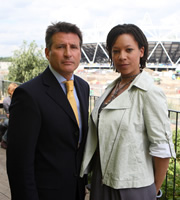 A visiting group of dignitaries from Rio (Olympic hosts in 2016) is in London for the week.

For head of deliverance Ian Fletcher and his team, the mission is simple. All they have to do is to meet the Brazilian delegation and take them by coach to the Olympic Stadium, where they will meet Head of LOCOG Lord Sebastian Coe. What can possibly go wrong?

As it turns out, just about everything - from language difficulties through satellite navigation issues to burst water mains and phantom punctures. For the team it's a lesson in the importance of staying positive and focused, even when you are literally travelling in completely the wrong direction...

I Don't Know Anything About A Gift

Finding a last minute gift for a Brazilian delegation proves no easy task for Ian and his team in episode two of Twenty Twelve, mock documentary behind the scenes of the Olympic Games in 2012.