Roman remains of potentially national significance have been discovered on the site of the Aquatics Centre.
Preview clips 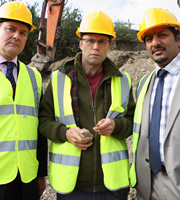 Roman remains of potentially national significance have been discovered on the site of the Aquatics Centre, forcing the team to contemplate radical last-minute modifications to the design of the building. Someone needs to ask some tough questions: What would happen if they made the diving pool shallower? Will it matter if athletes have to go through the cafeteria to get from the changing rooms to the pool?

Meanwhile, head of brand Siobhan Sharpe has decided that the Twenty Twelve games should have their own unique audio logo; head of infrastructure Graham Hitchins is grappling with the sensitive issue of civil aviation flight paths during the period of the games; and head of sustainability Kay Hope has to record her own video blog at the Olympic site itself.

Ian, Siobhan and Nick are on the move and mobile deciding which celebrities will represent the London Olympics in episode three of Twenty Twelve.

Roman Remains In The Diving Pool

What can Ian Fletcher do to avoid disaster when Roman remains are discovered on the site of the London Olympic diving pool in episode three of Twenty Twelve.