Ex-athlete Dave Wellbeck is, in theory, a natural choice as Brand Ambassador for a scheme to get young people inspired by Olympic ideals - but he has about as much charisma as a dimmer switch.
Preview clips 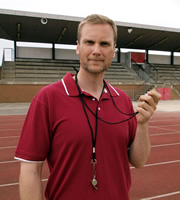 Dave Wellbeck is an ex-athlete, double Olympic silver medallist and, in theory, a natural choice as brand ambassador for Raising The Bar - a scheme to get young people inspired by Olympic ideals. He's hard-working, conscientious and loyal, but the truth is that he has about as much charisma as a dimmer switch and his busy schedule of presentations in schools around the country is having the effect of switching young people off in their thousands.

Meanwhile, head of sustainability Kay Hope is forced to stand her ground even in the light of the discovery that there may not after all be enough wind to power the much vaunted Olympic Park wind turbine.

Kay Hope is determined that there will be an Olympic Park Wind Turbine even if there is no wind to turn it.

How Do You Solve A Problem Like Dave Wellbeck?

Ian and Siobhan are faced with finding a role for Dave Wellbeck, an Olympic ex-athlete with the charisma of a dimmer switch in episode four of Twenty Twelve.