The Algerian Olympic team are still threatening to boycott the Games after discovering that the Shared Belief Centre does not face Mecca.
Preview clip 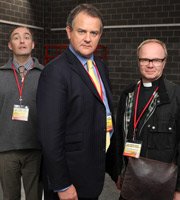 The Algerians issue a deadline of midnight for a solution to their demand for a Shared Belief Centre which faces Mecca, whilst the French are now threatening to pull out of the Games if a separate mosque is built. The team comes up with the idea of swapping the Shared Belief Centre with the Laundry Services Building which already faces Mecca, but to appease the Christians they'll need to get an architect in.

Is it architecturally possible to design a building that will satisfy everyone, or is the entire Olympic Games about to unravel in front of their eyes?

Ian's PA Sally has managed to get the water turned on in his new flat, but it won't be fixed for a couple of days, so he accepts her offer of her spare room for the night.

Ian and Siobhan head to the Olympic site to meet a representative from Muslim Focus UK in light of the Algerian crisis. Unbeknownst to Ian, Siobhan has also invited a PR friendly priest.