In an attempt to build confidence Ian joins the local boxing club and quickly strikes up a friendship with its aging owner and trainer, Jock. 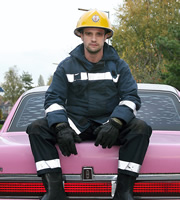 When the boxing club faces closure due to Jock's debt with Patrick Maguire, Ian enlists Maxine, Carl and Chesney to help raise the money. However, it soon becomes clear to Ian that he's stumbled into a hornet's nest of unfinished business that exposes the true nature of Patrick and Jock's relationship.