Carl and Chesney's attempt to outrun their troubles lead them to discover the grass isn't always greener, even in Wales. 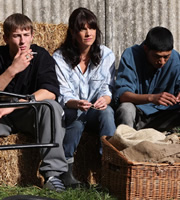 Stranded on a farm whilst on the run, Carl and Chesney are offered sanctuary by a mysterious woman, Hazel. Both wholeheartedly embrace the hospitality but things soon turn sour when news reaches them that they are now prime suspects for Bonehead's murder. Back in Chatsworth, Liam and Maxine seem to be the only ones concerned by their disappearance which forces Ian to confront Jimmy, the real murderer, to get the truth.