The Maguire clan is fully mobilised for the christening of its newest member - baby Connor, with Mimi pulling all the strings. 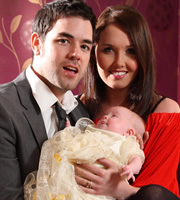 Mimi's first act, reallocating godmother duties, leaves now ex-godmother Kelly devastated. Shane is stuck in the unenviable position of being forced to take sides between Kelly's need for acceptance and his mum's pursuit of respectability. Kelly demands he permanently cut the apron strings if their relationship is to last.

Patrick's attempt to get involved in the family celebration is derailed by his own personal credit crunch. Papering over the cracks in his relationships Patrick tries to press-gang Shane and Jamie into his new plan for the family business. Whilst the lads turn him down an eager Micky is overlooked. Feeling ever more isolated, a fatal mistake by Patrick means Micky must come to his rescue. At his lowest ebb, Patrick takes the Christening opportunity to cleanse his own soul in front of the astonished family.

Meanwhile Karen's spending is burdening her and Jamie under a mountain of debt whilst her affair with Joe threatens to spiral out of control. At the Gallagher's; Carl's experiment in the bedroom shocks Maxine into retaliatory