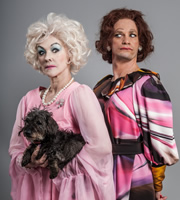 Hera talks to the Therapist

The Therapist talks to Hera, the wife and one of three sisters of Zeus.

The Statue Of Liberty is quite angry.