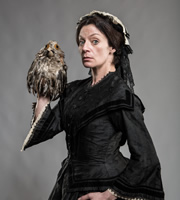 Dustin Demri-Burns is as an orgasmic Nora Ephron (the writer of the film When Harry Met Sally).

Also, Michelle Gomez plays an owl-loving Florence Nightingale, Doon Mackichan stars as a hair-obsessed Delilah and Selina Griffiths portrays women's rights campaigner Marie Stopes, who is determined to educate men "whose idea of birth control is to use his wife's back duct as a receptacle for his conceptual juices", before Miranda Richardson takes us on a fantastical adventure as Enid Blyton.

As ever, Rebecca Front plays the therapist trying to get to the bottom of their disturbing yet hilarious neuroses.

Maria Von Trapp is not happy with The Sound Of Music film.