A troubled Nancy Spungen performs a couple of lewd songs, and Eve talks, with great regret, about her sexual relationship with Adam. 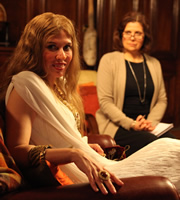 Emmeline Pankhurst (Ted Robbins) tells therapist Rebecca Front all about her working class Manchester roots, her spell in prison and the happiest time of her life on Fleetwood beach.

An excitable Barbara Castle (Sam Spiro) talks vividly about the sexual tension in politics and reveals her wildest fantasies. "When I met with the TUC, I didn't once think about Vic Feather's tight little bum."

A vain Helen of Troy (Julia Davis), complete with a thick brummie accent, discusses being spoiled by men her entire life and laments the difficulties of being so pretty.

Then a troubled Nancy Spungen (Tamsin Egerton) performs a couple of lewd songs, Mary Queen of Scots (Michelle Gomez) proves incomprehensible with her thick Scottish accent, Eve (Sharon Horgan) talks, with great regret, about her sexual relationship with Adam, and Mary Shelley (Katy Brand) proves quite intimidating as she explains the plot of her latest novel, Frankenstein.