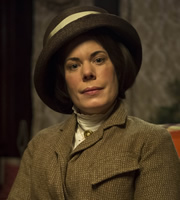 This week, Mary (Sam Spiro) reveals her anger at having spent a lifetime picking up tunics for son Jesus (Mathew Baynton) only to be shunned as he begins to spend time with his friends (who "worship the ground he walks on"); Enid Blyton (Julia Davis) rants about her hatred of goblins and their impact on the economy and Cleopatra (Sharon Horgan) shares her unhealthy fantasies about her brother.

While Katy Brand scoffs pies and tells crass jokes as Diana Dors, Doris Stokes (Frances Barber) aggravates Rebecca Front by pretending to hear the voices of her relatives; Dian Fossey (Steve Pemberton) reveals how King Kong first got her interested in gorillas; and animal-obsessed Beatrix Potter takes us into her dreams, which begin with her playing with her woodland friends but quickly darken into a distressing nightmare.