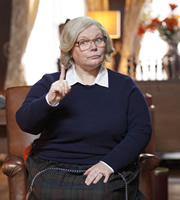 Liz Taylor (Sam Spiro) devours a chocolate éclair before discussing her two marriages to Richard Burton and her impulsive divorce from Larry Fortetnsky, confessing that her greatest regret is not having more husbands.

After admitting that her sexual partner of choice would be a "blind man", a grotesque Old Mother Shipton (Reece Shearsmith) and her toad deliver some less than profound prophecies, serving up some sage advice in a series of absurd riddles ("As sure as summer bringeth sun, and so in winter will heat be done. In spring do bringeth tree and bush, and yoghurt on the ***** cures thrush.").

Liz Taylor reminisces about her husband.