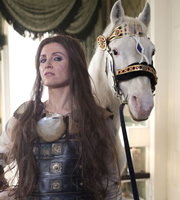 Kathy Burke reveals the secret behind Mona Lisa's smile and Mrs Alfred Hitchcock (Harry Enfield) opens up about her lack of sexual relations with her film director husband.

Sharon Horgan plays Boudica, who drops her carriage outside and brings her horse into the therapy room. She talks to Rebecca Front about how she would like to be remembered - "as long as they pronounce my name right, I don't care".

Julia Davis mimes her problems as silent movie star Mary Pickford while Catherine the Great (Frances Barber) worries that rumours of her many lovers will overshadow her legacy.

Sarah Solemani also takes to the couch as Anne Frank and Zawe Ashton plays an Eartha Kitt, who fails to let go of her role as Catwoman in her later years.

Plus, in the series' closing sketch, we take a peek into the dreams of Queen Victoria (Sam Spiro) as she questions what her raunchy fantasies about husband Albert might mean.