Agnes is determined that, despite his parents' wishes, grandson Bono will not be attending the infamous local primary. But she's also got her annual New Year's Eve party on her mind.
Preview clip 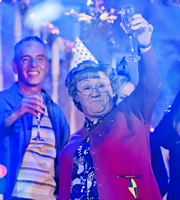 The lead-up to New Year starts with some sad news as Maria discovers she has lost her Auntie Mary in a car accident. As if that wasn't bad enough, Father Damien and grumpy new parish priest Father McBride announce that Mary's pet parrot will need to be put down unless someone offers to take it in.

Meanwhile, Mark and Betty have decided that Bono is going to attend the infamous local school, St Stephen's. Convinced that it will be too rough for her beloved grandson, Agnes does everything in her power to convince the couple to change their minds. But with Father McBride also determined to stand in her way, is this one battle that Mrs Brown simply isn't going to win?

Luckily, Agnes has her New Year's party planning to take her mind off things - if only people would stop turning down her invitations! Winnie's off to visit Jacko; Mick's organised a surprise getaway for Cathy; and Mark and Betty are heading to Donegal. Even Rory and Dino have to call off after Mrs Brown's plan to turn Dino into a meat eater goes awry. It's starting to looks like Agnes will be seeing in the bells on her own after all.

At least she and Winnie have some helium to keep their spirits high! Although before Agnes can start worrying about her balloons, there's a rather more noxious gas causing her trouble...

Winnie and Agnes play with helium.