Dressed to impressed, Lisa aims for the top of the career ladder, but a lack of formal qualifications is holding her back. 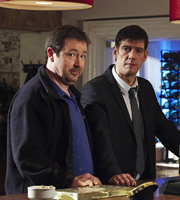 Hold on to your hats potential employers, Lisa is coming to get you. Dressed to impressed, she aims for the top of the career ladder, but a lack of formal qualifications is holding her back. Dan, meanwhile, hopes generous amounts of champagne and sweet-talking will convince his wife it's time to start a family.

Elsewhere on the cul-de-sac, Fergus has a proposal for Denise - a business proposal, that is - and Bianca rides the winds of change by applying for a job at the pub. It's the perfect spot to spy on Gary's night out with Ella, too, even if neither teen knows whether they're on an official date or not.

Trouble looms later in the episode when Dan finds himself in a date-like situation with Tanya after their other halves pull out of a planned dinner party. As the night draws in and the pair get cosy, it looks like the hamper of Spanish goodies she's stolen isn't the only thing of Lisa's that Tanya is keen to get her mitts on.