Fergus ends up on dad duty while Denise gets her modelling career started, leaving Lisa to do all the graft setting up their first office. Dan is not best amused. 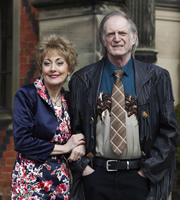 Lisa bickers with business partner Fergus about their first office, and forgetting that Rome wasn't built in a day, she can't imagine an empire ever growing from a grotty old building. Then, Fergus ends up on dad duty while Denise gets her modelling career started, leaving Lisa to do all the graft, which in turns prompts a row with Dan, who thinks she's putting work before kids.

Things get messy, meanwhile, when Charlie and Pauline scout wedding venues. The bride lines up meetings with Manchester's swankiest hotspots, but it's a ploy to get leathered on free booze and convince Charlie karaoke and a finger buffet is the way forward. Likewise, Bradley pleads with Tanya to fess up about stealing Lisa's hamper and lets slip this isn't the first time she's got sticky fingers.

The Johnson boys also give into temptation, with Greg getting more than he bargained for from drug dealer Gerry, and Dan falling for the charms of his sultry neighbour.