Miranda's recent experience in the graveyard gets her thinking. This week she starts to worry what her life is all about and what people would say at her funeral.
Preview clips 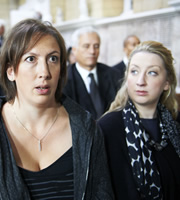 Miranda starts to worry what her life is all about and what people would say at her funeral.

Meanwhile, Tilly and Penny are organising a charity wine-tasting and Miranda thinks perhaps she should start doing some good - but a stint volunteering at an old people's home and an attempt at a parachute jump don't go according to plan, in typical Miranda style. So she pins her hopes on Gary's old friends, Chris and Alison, who are choosing godparents for their baby. They choose her, and she is resolved that she is a good person.

However, after spending time with them she remembers that they are the most nauseating couple ever and doesn't want to be involved in their lives. Miranda decides to ditch her plans for a good eulogy and sets out to prove she is not a worthwhile candidate for a godparent - much to her mother, Penny's, embarrassment.

Behind the Scenes: Funeral Fall

Behind the scenes with the cast and crew of Miranda, series 2. In the second of six "Behind the scenes" videos, Rufus Wright and Maggie Service introduce us to a funeral scene.

The world of Miranda Hart: Gary & The Restaurant

Tom Ellis gives us a guide around the bar.

Miranda volunteers to read to elderly residents at a retirement home.

I Wish The Ground Could Have Swallowed Me Up

After an embarassing speech at a funeral, Miranda wishes the ground could swallow her up. Sometimes one has to be careful what one wishes for.