Miranda has some difficulty convincing people she's not actually having a breakdown.
Preview clips 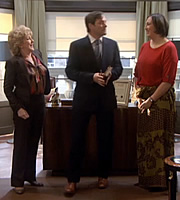 An incident in a park with an ice cream van, a handsome jogger, a teacher and a class of six-year-old children is enough to drive anyone up the wall...

When Miranda and Penny end up in the police station, Penny leads the police to believe that Miranda is a bit unstable and they are both forced to see a therapist for an assessment. All they need to do is sit quietly and control their temper with each other - but this is Miranda and her mother, after all. Will the unnervingly silent therapist believe the constantly scrapping pair are just as sane as any other bickering mother and daughter?

Miranda and Penny use roleplay and attempt to see things from the other's point of view...

In an attempt to act normal Miranda becomes increasingly conscious of her arms, legs and posture...

Miranda chats to her real-life Mum (Dee Hart-Dyke) and Patricia Hodge, who plays her Mum in the sitcom.