Things are looking up for Miranda's love life when as she finds herself with two dates and two men vying for her affections. As always with Miranda, these things are never simple and she risks losing out on her perfect man.
Preview clip 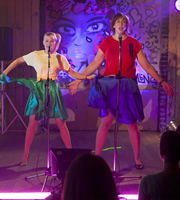 Tilly is driving Miranda and her mother, Penny, crazy with her plans for her upcoming wedding of the year. But all Penny really wants is for Miranda to be the one walking down the aisle.

Meanwhile, Miranda finds herself with two dates - one with Tilly's fiancé's ghastly best man, Charlie, and another with a charming man whom Stevie has set her up with. Miranda is delighted to find her date with the latter goes uncharacteristically well. But things take a turn for the worse when Miranda attracts some unwelcome attention from Tilly's fiancé and her plans to expose him using a honey trap could result in her losing the man of her dreams. Will Miranda find herself unlucky in love again?

Exclusive from BBC's Red Button, Miranda Hart chats to Sally Phillips and Adrian Scarborough about acting in front of a live audience.