Miranda tries to have the perfect Christmas in the final episode of the comedy series but, with a mum and dad like hers, it's not easy.
Preview clips 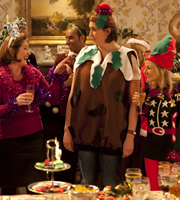 What with her mother's organisational chart, her father's obsession with the weather and a nightmare "best Christmas jumper party", Miranda decides she simply can't take any more and she and Stevie hide, spending Christmas in Miranda's flat with Gary, Clive and Tilly instead.

But this being Miranda, things still don't run smoothly. The presents she ordered online don't arrive, she has an infuriating encounter at the post office, a run in with some carol singers, argues with her friends and is forced back to her parents. Can Miranda salvage the situation and have a merry Christmas after all?

After missing the courier delivery of her Christmas gifts, Miranda struggles with the automated service to organise redelivery before Christmas Day!

Miranda interviews her sitcom family and gets all the juicy gossip from the cast and behind the scenes at Christmas.

The World of Miranda Hart - Penny

Miranda becomes flustered when she discovers that Doctor Gail isn't a female doctor, and perhaps even worse is a rather attractive man!