There's a new girl on the scene this week and Miranda and Stevie find it tough going to keep up with her youthful energy and frenetic lifestyle.
Preview clips 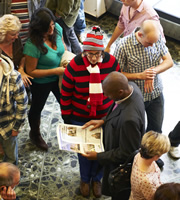 Miranda has a new friend in Tamara, a waitress at the restaurant. Jealous of the time Miranda is spending with Tamara, Stevie decides to get in on the act and the pair start competing with each other to prove they are better friends with the unsuspecting Tamara. That turns out to be easier said than done when they realise the lifestyle of the 20-something is now some way out of their comfort zone. An art class, complete with life model, proves too much for Miranda, who finds it impossible to keep a straight face.

The tide turns when Tamara makes the mistake of assuming the pair are in their mid-40s and Miranda and Stevie unite to prove that, at 35, they are still young. But are they really able to relive their younger, wilder years - or would they be better off having a hot chocolate and an early night?

Miranda Hart chats to Tom Ellis about playing eye-candy Gary in her sitcom.